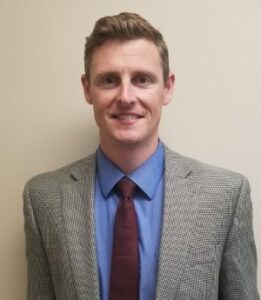 Attorney Chase Molchin joined Ginzkey Law Office in April 2018 after spending several years working with one of the top personal injury law firms in Northwest Indiana. He is an experienced trial lawyer with a special interest in complex plaintiff’s litigation. Chase is licensed to practice in Illinois and Indiana and has been enthusiastically representing injured clients in court since 2011. In his first solo trial, Chase Molchin obtained a half million dollar ($500,000) verdict on behalf of his client! Since then he has secured several million dollars in judgments and settlements for his injured clients.

A native of Peoria, Illinois, Chase is a graduate of Peoria Notre Dame High School where he was the only member of his class to play on the football, basketball, and baseball teams all four years. After playing collegiate baseball for two years, he decided to focus on fulfilling his goal of becoming a lawyer.

Chase completed his undergraduate education at Eastern Illinois University. Thereafter, he obtained a Juris Doctorate and a Master’s degree in Business Administration from Valparaiso University. V.U. is also where he met his beautiful wife, Annica. His experience with value-based leadership from V.U. helps him develop amicable relationships not only with other attorneys, but more importantly with the people he represents.

Chase understands that his clients’ injuries often affect every aspect of their lives and their families’ lives. Personal injury cases involve many critical long-term decisions. Compensation is needed to pay for past and future medical expenses and rehabilitation. Without compensation for lost income or wages, it is very difficult for an individual or family to stay economically afloat. That is why Chase treats his clients with respect and compassion and not just as another case file. He takes extra care to ensure all of his clients’ needs and concerns are addressed.

Chase Molchin is a personal injury attorney in Bloomington, IL who understands that obtaining a settlement or verdict is sometimes only part of the battle. To obtain fair compensation for his clients, Chase will negotiate with healthcare providers and insurance companies to reduce their liens and to maximize his clients’ recovery.

Away from the office, Chase enjoys camping, hiking and skiing, but his competitive spirit shines during group cycling and gravel racing with friends. He is actively involved in the Bloomington cycling scene, and is a zealous advocate for injured cyclists. He resides in Bloomington, with his wife and children.

We represent clients in all types of personal injury lawsuits, including car accidents, product liability, medical malpractice cases and construction site injury cases. We work on a contingency fee basis, and we offer a free and confidential initial consultation with an experienced personal injury lawyer.